From my Contiki European Experience tour.

Got up early and started the bus journey. Met the ferry and had breakfast.

Finally made it to Paris. We did a city tour by bus, had some snails then spent the night going up the Eiffel Tower. I took the stairs. It was difficult, but easier than the 1st time.

I did not want to go to the very top but like what the hell and did it anyways.

This morning I was cleaning out some old notebooks and I found a travel journal I started during my 2013 Contiki trip to Europe. This was the trip that I added Monaco and Liechtenstein to my list of travelled countries.

Great flight. Heathrow went quite quickly. I thought that I had food poisoning on the flight as I was very gassy.

Then I went to the Royal National dropped off my bags and then explored the city walked across Westminster Bridge seen the London Eye and Parliament. Then went to Canada Water to pick up a few items at the mall.

Went back to the hotel & checked into my room. Then I met my roommate Probin from Regina, SK. Went to see Westminster and Buckingham Palace. Then back to the Royal National for the meetup and drinks at London Pub.

There is not a more fitting way to start this post than with the Face of Truth. The truth about Rome is that it is the most miserable place on Earth.

This was my 3rd visit to Rome and it seems to never get better. Rome has a very limited  Metro system so getting around is not the easiest although unlike many other cities Rome is very consolidated into 2-hour walk to anything. The charm about Rome is its history as the centre of an ancient empire. Though when you get to see the real Rome most of the ancient ruins beside the Coliseum, a field where Circus Maximus was and the Pantheon there is really not much left to see of that empire. The only real remaining Empire left to see is that of Christianity and Catholicism.

When it comes to food, Rome is very lacking in its own identity. It adopts styles from other Italian regions and International Inspiration. On my first night in Rome, I went to a place called Piazza Navona which was loaded full of people eating at all the restaurants that circled the Piazza. I went through a couple of allies and found Ristorante Ottavio. I was small, quaint and “Roman”. In typical fashion, while travelling I ask the server what is really good to try. The gentleman says that the lobster is very “fresh and wonderful”.

I then ask him how fresh it is. He quickly leaves and brings back this poor almost dead looking lobster that to most who have never seen a real fresh live lobster before would be very thrilled.

So instead I ordered a pasta dish that was much more amazing than the plate that that poor unfortunate lobster would eventually have ended up as. While in the Piazza I saw a Seagull catch a Pigeon in mid-air and fly off with it in its beak. This had me thinking that given the number of pigeons and seagulls that we have in Saint John that this is just further proof of the miserableness of Rome.

Though Rome does have many sides and moments of wonder. Earlier that day I was on a walking tour of the area and as I approached the Pantheon the skies just opened up and dumped as much water as it possibly could on the crowds of tourists and street people who with amazing speed switched from selling collectibles to selling ponchos and umbrellas.

That being said it did not rain for very long just long enough to get completely wet and leave enough water to make it more humid as being evaporated by bright sunshine that rapidly came out.

The Trevi Fountain was amazing as usual and like Pigeons in King’s Square or like any other old thing in Europe was over packed with crowds of people.

And the Coliseum and Roman Forums have not changed a bit since the last time I have seen them in 2011.

It has been a while since I posted anything and it is not like nothing has happened.

I took another amazing trip to Europe. The goal this time was to see amazing new things that I would not have seen if I actually planned the trip. It may not be a surprise to some of my loyal readers that I have a short attention span and my plan for Paris was simple. Do the Eiffel Tower at night, then on my full dat go to L’Arc de Triumph, go in Notre Dame, and see Rodin’s House. 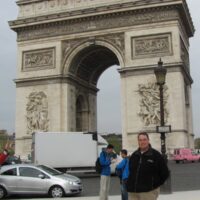 What did I end up accomplishing? Just the tower and arc from my list.

As it turns out I was going to walk down the Champs de Elysee to get to see the Charles de Gaulle statue and get on the Metro. As I walked down the street I noticed these mini malls and started to check them out until I found one that near the end had a back entrance to an alley. It was in this ally that I found the most amazing baked thing with raspberries that has ever entered my mouth. I should have taken a photo or wrote down the name of it… but it didn’t last long enough. At this point I realized that I spent way more time than I though I would have so I finished the street and made it to the metro. I never did find that statue but I got this amazing photo.

Then I get to the Metro station and I have to transfer twice to get to the Arts et Metiers station. Though I never made it there. Why not you might ask? It is because I ran into a station that the train stopped at nearby called Bonne Nouvelle. For those readers

that know some French will know that the name of the station means Good News! What type of explorer would I be if I missed the opportunity to visit Good News. So I got off and then made it to the street and got my bearings to the general direction I needed to go. Then as a continued to walk I found a little hidden gem not one but two really cool old arches that were even more impressive than the main three of Paris. 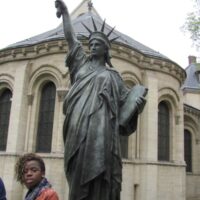 Then finally after a 20 minute walk to where I was supposed to get the train to, I finally arrive at the Musée des Arts et Métiers. As i make my way around the building to the entrance to the museum I get the amazing welcome that many poor immigrants to the United States got to experience over a hundred years ago. It was a bronze cast of the plaster model original that was used to size to scale the giant version of La Liberté éclairant le monde (Statue of Liberty) that welcomes people to New York harbour. This museum has the original plaster version inside the converted church that is now basically a church of science and

engineering. The name of the museum is a little deceptive because it translates to Arts and Crafts but there are amazing gems in this place including a kilogram, a satellite, every measuring item that you can imagine. Very old adding machines up to the Cray-2 (world’s fastest computer 1985-1990). Very old to almost new but obsolete technology. It is a geek’s nerdvana.

After the Museum it was time for some lunch then grab the train to Notre Dame because I had a plan. As I started walking down the street passing station after station looking for a Baguette sandwich that I was craving I realized that this was probably the only place in town where there was no food cafés or I just stuck at noticing things and missed them. Finally I find one and it was the best ham and cheese sandwich that I ever had (at that time and for about a week until I hit up Rome).

By this point I was at the City Hall and enjoyed the square and was getting tired but I could see the Notre Dame in the distance so why not just walk the rest of the way. As I get there my feet are tired because I had new shoes and my gel insoles were still in my bag at the hotel. I see the big line and figure why not take a few photos in front of the church and the head to the Rodin House. 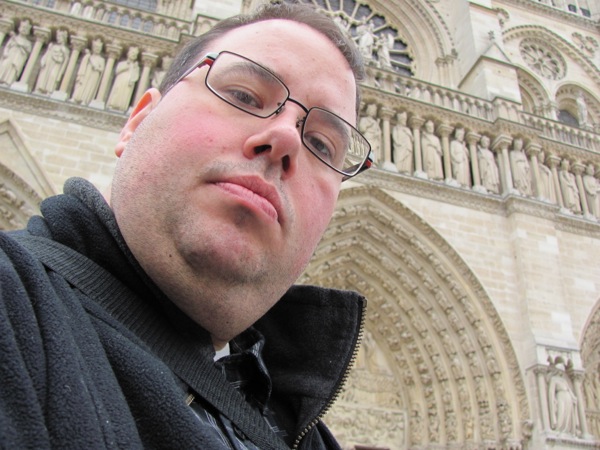 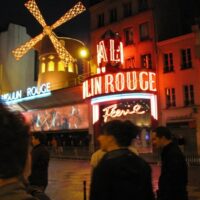 I then get in the Metro and make it to the Rodin House but by the time I get there my time is up and I need to walk back to the pick up point. I went back to the hotel to get changed then we headed out for dinner where I really enjoyed some wine and great french food. Seen a cabaret style show. Then tried really hard to debate some very good points, lose a stupid argument, and headed back by taxi to the hotel for some sleep and then a really long shower to relax.

It is really cold today. It has been less than a month now since I booked my next trip.

On my last trip my old reliable large suitcase met it’s last days from the cobble-stone sidewalks of Rome. That’s right I have to move on with life and break in a virgin suitcase on this trip.

My new suitcase is slightly larger and a harder case. I bought it at the Zellers liquidation sale. It’s biggest problem is there is only one outside pocket. I’m undecided still on whether or not to by a new dangly thing. My last one was given to me buy my old friend when I had forgotten my previous on prior to my first WordCamp trip.

On an interesting note to me anyways, I was cleaning off my dresser and under the pile of junk was my dangly thing. I tried guessing what was in it as it felt unusually bulky. I thought it might have been the baggage tag for my last Toronto trip. I was wrong. (Even though some people think I would never really say that.)

The tag in my dangly thing was the luggage tag from YSJ to FCO via YUL. (Saint John to Fiumicino (near Rome) via Montreal).

Personally I find Rome to be one of the worlds worst historic cities. From all the thieves to the difficult sidewalks to the crazy drivers to the very long lines almost every city in Europe is better than Rome. Though perhaps my views would be different if I ever found true love in Rome. We will have to see May 6-8th.